🛑 Potassium perchlorate is used for individuals sensitive to iodine, and if no other method for thyroid blockade is available.

Patients should start 1 hour before mIBG injection and then continue up to 5 times in the following 36 hours. 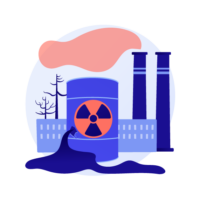 Radioactive iodine may be discharged into the environment in some radiation events, such as nuclear power plant accidents, and enter the body by inhalation or ingestion. This is known as internal contamination. High quantities of radioactive iodine absorbed by the thyroid can raise the risk of thyroid cancer in newborns, children, and youths for many years following exposure.

Iodine Thyroid Blocking (ITB) should only be taken if public health or emergency response professionals, or a healthcare provider, instructs to. ITB has the potential to be damaging to one’s health. ITB is only useful for certain groups of people in specific circumstances.

Iodine Thyroid Blocking (ITB) should not be considered a stand-alone protective action. A comprehensive public protection strategy covering all urgent and early protective actions, as well as other response actions, including evacuation and sheltering, restriction on consuming contaminated food, milk and drinking water, should be developed as per the IAEA’s general safety requirements  and its supporting safety guide.

The optimal period of administration of stable iodine is less than 24 hours prior to, and up to two hours after, the expected onset of exposure. It would still be reasonable to administer (ITB) up to eight hours after the estimated onset of exposure. However, starting with ITB later than 24 hours following exposure may yield more harm than benefit since it would prolong the biological half-life of radioactive iodine that has accumulated in the thyroid.

A single administration of stable iodine is usually sufficient. However, in the case of prolonged (beyond 24 hours) or repeated exposure, unavoidable ingestion of contaminated food and drinking water, and where evacuation is not feasible, repeated administration of stable may be necessary. Neonates, pregnant and breastfeeding women and older adults (over 60 years), should not receive repeated ITB.

A study reports that at doses of 400 mg/d for several weeks had adverse effects such as GI irritation, skin rash, and lymphadenopathy but cited no serious complications. In patients treated with 400 to 1,000 mg perchlorate daily, cases of agranulocytosis and fatal aplastic anemia have been reported. Several deaths from aplastic anemia in patients treated with perchlorate at doses of 400 to 1000 mg/d for 8 to 33 weeks were also reported. The last report of fatal bone marrow toxicity related to treatment with potassium perchlorate was in the 1960s.

About the Author: Nasser AlMutairi